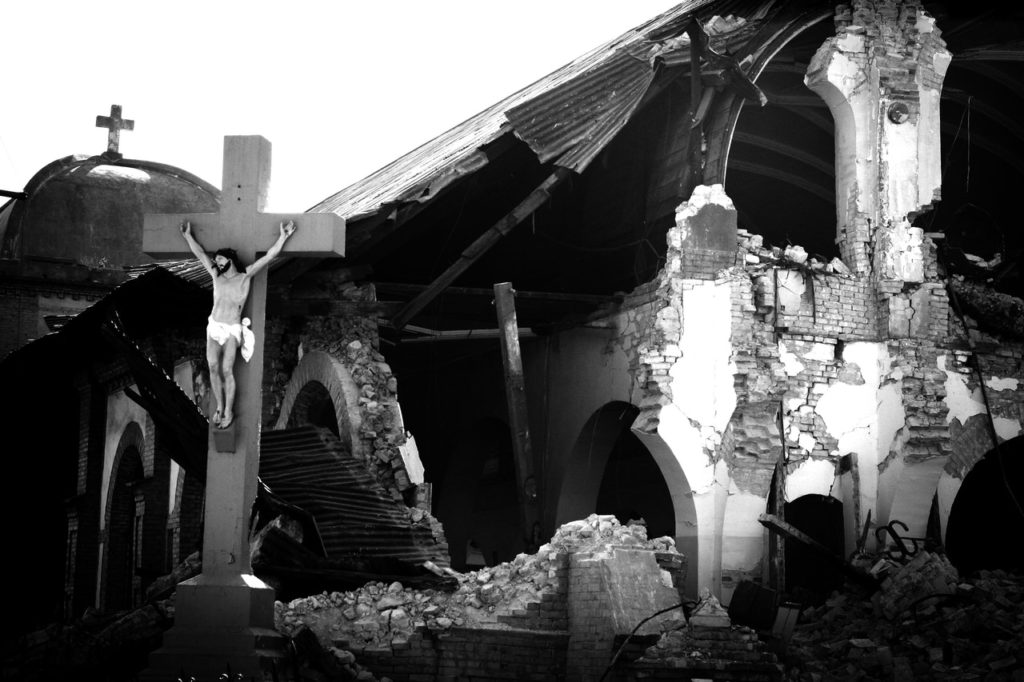 To that I ask why?

These are hard and complex questions, but they are not questions which have no answers. Nor are they questions we should shy away from and leave to the “learned” among us. By doing so we leave ourselves and our beliefs open to attack, and so when having no real answer, we must simply and quietly submit to the scorn and arrogance of those who oppose those ideas we hold to be true.

Is this what we are called to do? Simply take it?

But even if you should suffer for righteousness’ sake, you will be blessed. Have no fear of them, nor be troubled, but in your hearts honor Christ the Lord as holy, always being prepared to make a defense to anyone who asks you for a reason for the hope that is in you; yet do it with gentleness and respect, having a good conscience, so that, when you are slandered, those who revile your good behavior in Christ may be put to shame.

“We destroy arguments and every lofty opinion raised against the knowledge of God, and take every thought captive to obey Christ…”

Beloved, although I was very eager to write to you about our common salvation, I found it necessary to write appealing to you to contend for the faith that was once for all delivered to the saints.

Clearly we are called to have a defense ready. Yet, even in this, we are ever and always called to love, which leads the way to Christ.

so that we may no longer be children, tossed to and fro by the waves and carried about by every wind of doctrine, by human cunning, by craftiness in deceitful schemes. Rather, speaking the truth in love, we are to grow up in every way into him who is the head, into Christ…

I love forums. I am even active in a few,  both secular and Christian. I joined a few Christian ones for the sole purpose of being around like minded individuals and ideas, to get my batteries recharged so to speak. Sadly, this has not been the case. Instead of being given encouragement and safe harbor, I have been disgusted and discouraged by what I am reading in the Christian forums. And it is for these reasons, frankly, I am writing this post. Sure, there are hard questions, there are even questions we will never fully be able to answer. But there are too many occasions in forums and blog posts where Christians fail to defend even the simple questions. So rather than defend a position which the world finds unappealing, they choose instead to cover the weakness of their own conviction for the Word with language that seems reasonable, flexible, and tolerant.

In these forums the topics have included: Christians who believe Adam and Eve are mythical figures, Christians who believe the Genesis account of creation up to the Noah flood is nothing but metaphor and allegory and Christians who don’t believe in hell. What is shocking is that as best as I can tell the vast majority of the vocal people on the forums seem to agree that Adam and Eve are mythical, that Genesis is largely metaphorical, and hell doesn’t exist. I have found myself in the minority every time. I am the type of person who loves the debate, so I find that aspect very interesting as it challenges me to discover Biblical evidence to refute the argument. I bring it up only to show how far we have come; the Bible was once held as the sole fount of truth, as God breathed, as something to be held sacred;  it has become a book of metaphor, poetry, and whimsy—scarcely worth more attention than Plato’s Republic or Dante’s Inferno. Rather than the very Word of the living God, we have turned the Bible into a tome of mere guidelines, a book made up of myth and legend.

So as an example let’s ask, what’s the harm in not believing Adam and Eve were created by God? Why can’t they be myth to prove a truth? The answer is that the Bible is not fodder for post-Enlightenment reductionism. You can’t just treat it’s messages like a collage of magazine cutouts; no, it’s a finely woven fabric, delicately and precisely woven of a single strand. Pull at the end of the string and watch it all unravel. What happens when we take Adam and Eve as myth? Let’s look at what might happen when you logically ask:

Now this is obviously not a complete list. But you can see how a Bible taken as absolutely true, as a book to be believed as truth, unravels very quickly when we begin calling large portions of it myth, legend, or mere metaphor. And where does it stop? I offer these questions only to ask, at what point in Genesis can we say it goes from myth to factual, from story to documentary. What criteria exist whereby we might judge Biblical fact from Biblical fiction?

So why apologetics? Does God need defending? No, He doesn’t. But we are called to make a defense. Look at what passes for defense today: calling the facts of the Bible fiction in order to pacify that intellectual toddler known as political correctness; deconstructing the Word of God to stroke the cultural status quo;  abandoning the high calling of Biblical Standard Bearer for all the pedestrian creature comforts that come with spiritual mediocrity.  I think when Peter spoke of being ready to make a defense of the hope that is in us, he meant more than playing possum. We must, however, take care not to substitute defense for offense or attack. We should note that we are called to apologetics in 1 Peter 3:14-16, not polemics. A call to defend isn’t a call to bludgeon the world with our knowledge, but to be ready when the curious ask, or when false doctrine is taught as sound doctrine, or when we need to defend our faith in God and the truth of His Word.